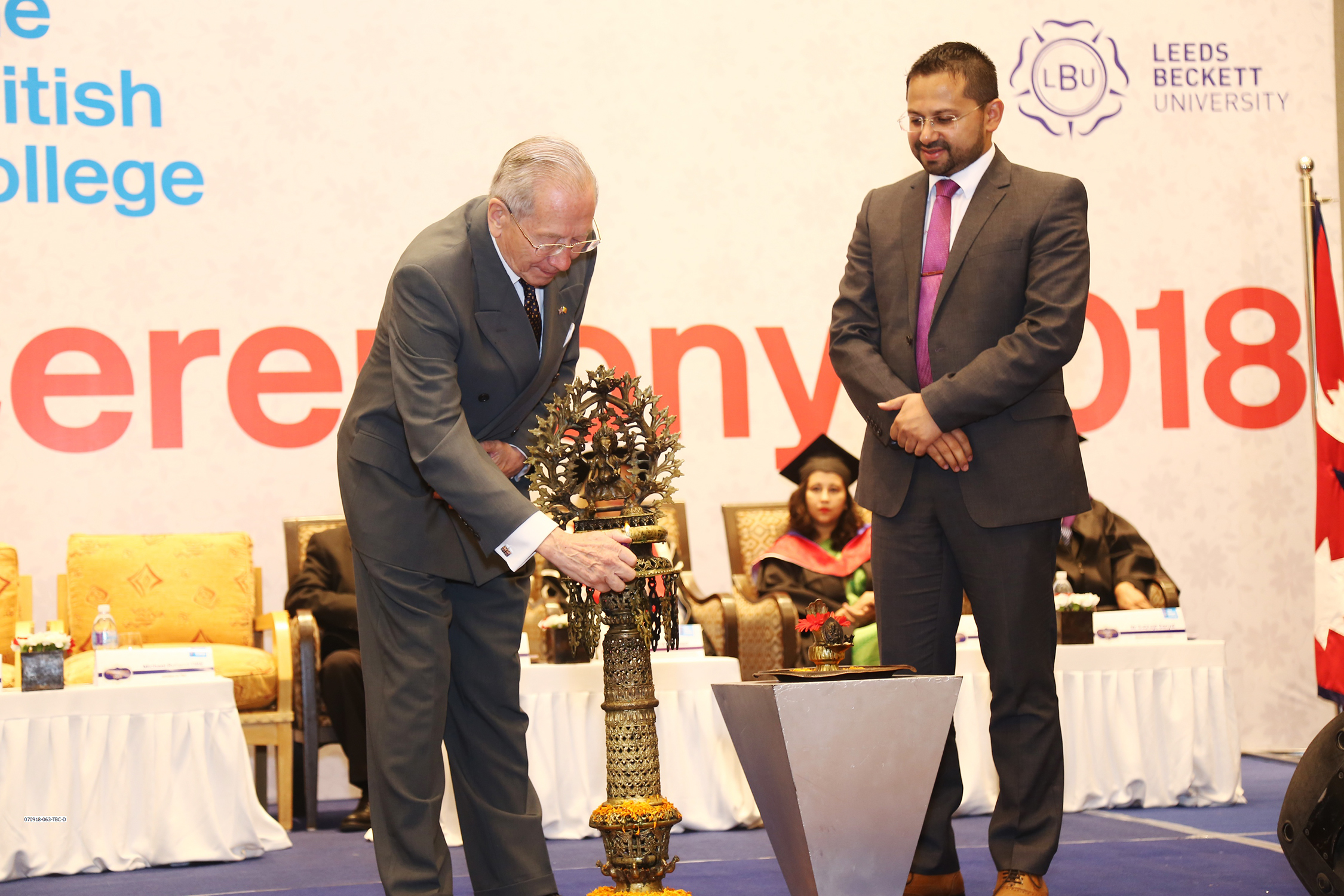 At this ceremony, all the students of The British College were recognised and rewarded for the completion of their degree programmes. 60 students graduated with BBA (Hons) Business and Management; 30 with MSc International Business Management from The University of the West of England, Bristol and 123 students with BSc (Hons) Computing; 12 with MBA (Executive) from Leeds Beckett University. This is the largest graduating batch to date demonstrating an impressive growth in the success and popularity of the college. The programme started off with a welcome address by Dr. John Bateman, Principal of The British College, followed by a formal address by Mr. Rajen Kandel, CEO & Founder of The British College. In his formal address, he shared his further plan of expansion of the TBC to Dubai and London. He highlighted the importance of International exposure and encourage undergraduate students to undertake for further studies at Master’s Level. He congratulated all the graduates and parents at this event.

Similarly, H.E. Richard Morris (Her Majesty’s Ambassador to Nepal), talked about the bilateral relationship between Nepal and Britain which began 202 years ago. He further mentioned that education is important to alleviate poverty and the graduates need to make a wise use of their education to bring change in the country. Mr Morris also focused on the quality of education that The British College has provided by partnering with two of the UK’s reputed Universities.

Mr. Rajendra Khetan, a Nepalese Businessman and Chairman of Nepal Britain Chamber of Commerce, congratulated the graduates. He also talked about the challenges that the students will have to face in the corporate world and how the graduates can capture the competitive as well as the comparative advantage in the future.

One of the graduate speakers, Ms. Joshua Shakya from BSc (Hons) Computing thanked The British College and Leeds Beckett University for all the experience and opportunities she’d been given, and for giving students like her a place to find their true self.

The Chief guest, Mr. Rutland, shared words of inspiration as he explained the term ‘change’; making aware of the changes beyond the physical changes in the world and recognising the significance of changes in the mind and in the heart. He described the graduates as warriors and all the graduates’ parents as heroes. Finally giving credit to Mr. Rajen Kandel as the unsung hero for making the college what it is today.

Following the final remarks, tokens of appreciation were delivered to all the respected guests.

The ceremony was followed by further celebrations as graduates joined with their parents and friends for photographs and food. It was the perfect way to end a very memorable day. The event was a huge success and all those involved were honoured to be involved. The staff at TBC wished the graduates the best of luck in all their future endeavours.