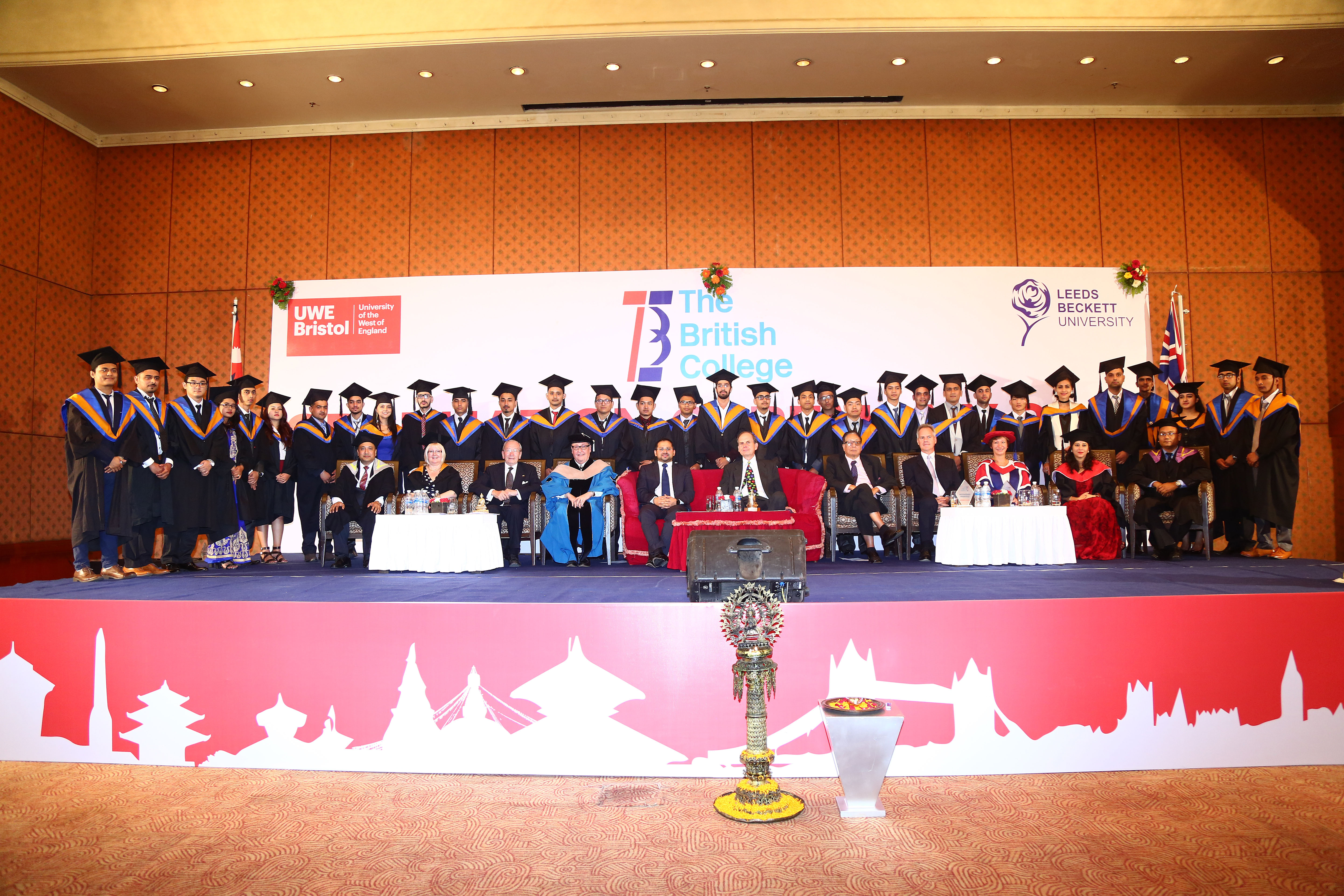 The hard-work and tenacity of all students and staff at The British College was recognised and rightfully rewarded yesterday in the celebration of the completion of their degree programmes. 52 students graduated with BBA (Hons) Business and Management from The University of the West of England, Bristol and 86 students with BSc (Hons) Computing from Leeds Beckett University. Of the 138 graduating students, 15% of BBA and an outstanding 29% of BSc Computing students achieved first class honours degrees. The results revealed a huge growth in the success of the college and are a testimony to the efforts of TBC staff.

The event attended by students, staff, parents, friends and honourable guests was held at the extravagant Hyatt Regency, Boudha hotel a fitting venue for such incredible success and merriment. Representatives from both the awarding universities, Dr. Fiona Jordan, Associate Dean of UWE and Ms. Lesley Earle, Principal Lecturer of Leeds Beckett, attended the event; they expressed their extreme pride and respect for the graduating students and delivered motivating advice to the graduands in preparation to embark on their professional careers. The event was also attended by The British College Advisors, the honourable John Edward Hollister Montagu (11th Earl of Sandwich), Dr. Chiran Thapa (Accredited Educationalist), Mr Michael Rutland (The British Honorary Counsel in Bhutan), Mr Paul Cleves (Former Head of Geography at Eton College) and Dr. Michael J. Barnes (Principal of The British College)   who were delighted to be involved in the celebration. Special guests Katherine Smitton, Deputy Head of the UK Embassy and Rajendra Khetan, Chairman NBCCI took the opportunity to recognise the significance of the student’s success and to instil students with hope in their futures.  Mr. Rajendra Khetan spoke about the challenges that the students will have to face in the corporate world and how the graduates can capture the competitive as well as comparative advantage.

The students were jubilant to receive their degrees alongside their course mates and friends. Many emphasised the support they received from their family, friends the dedicated staff at The British College in their journey to complete their degree. One BBA graduate, Safalta Shrestha eloquently shared her experience accrediting the college with changing her life, for providing invaluable teaching and opportunities she could have not imagined.

In the ceremony CEO, Rajen Kandel expressed his great pride in the students and the institution. The British College, established in 2011 has grown to be a unique educational institution and his dream to make an international education accessible to Nepali students has become a reality. The students he suggested are the true ambassadors of the college and he is eager keep in contact with them, to follow their future success.

The ceremony was followed by further celebrations as graduates joined with their parents and friends for photographs and food. It was the perfect way to end a very memorable day. The event was a huge success and all those involved were honoured to be involved. The staff at TBC wish the graduates the best of luck in all their future endeavors.