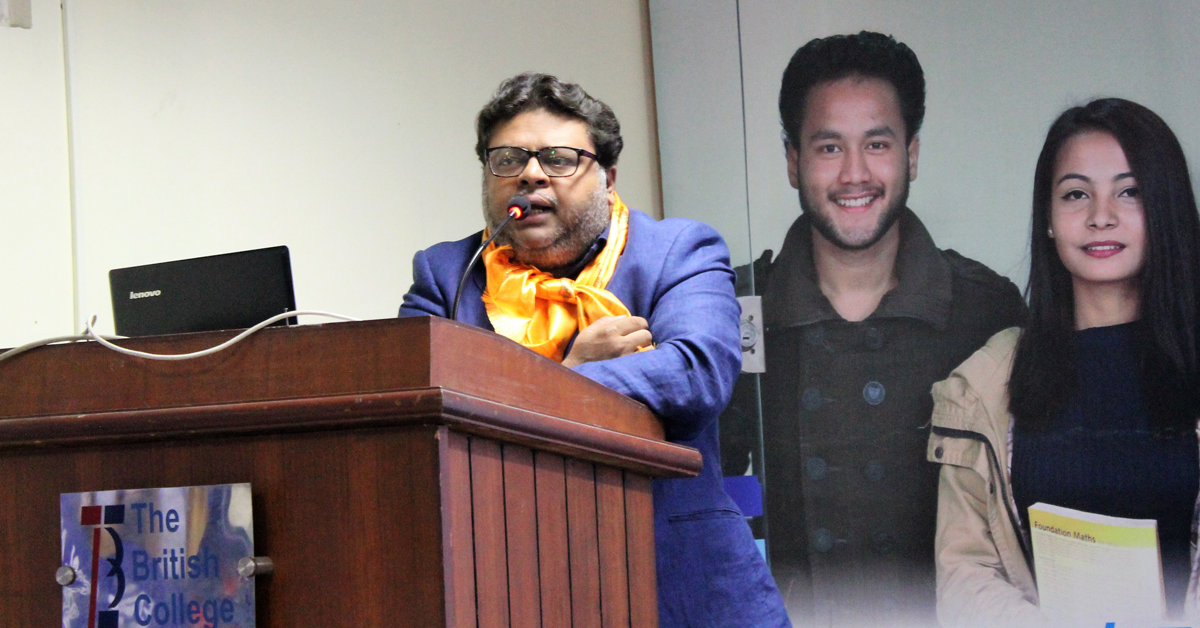 “This session most definitely expanded the horizons of the students regarding the private sector, the stock market and the Nepalese economy,” said Supriya Tuladhar, Communications Manager, TBC.

In the lecture, Mr. Khetan shared his knowledge and experience of Nepal’s involvement with the global economy and of globalisation in the context of Nepal. Mr. Khetan covered Nepal’s membership of GATT (General Agreement on Tariffs and Trade), and economic reformation after Nepal’s membership with WTO (World Trade Organisation). In addition to this, he also shared how its membership allowed private sectors into the financial market; it was possible for private banks, aviation, etc. to enter the market.

Mr. Khetan shared details of his ancestors who were brought to Nepal from India by the Gurkha Government (Government before Nepal Government), they were given a license to do business, and later, they were made naturalised citizens of Nepal. Today, the Khetan Group has a highly valued financial industry which includes Laxmi Bank, Laxmi Microfinance, Laxmi Capital, Prime Life Insurance, making them an essential contributor to the Nepalese Economy. The Khetan Group was the first to hold a license under the new economic reformation post Nepal’s membership with WTO; they established the Himalayan Bank, the first commercial bank of Nepal with maximum shareholding.

Following this, Mr. Khetan shed light on the relationship between Nepal and India, discussing the economic effects of this rapport. Furthermore, there was a discussion about the role of Asian Development Bank, SAARC, and SAFTA in the reformation of Nepalese Economy.

The question and answer session at the end created a valuable interactive session; a privilege for both students and faculty members present to gain an insight into Mr. Khetan’s experiences in the Nepalese Economic System and his expansive specialist knowledge of the business sector.